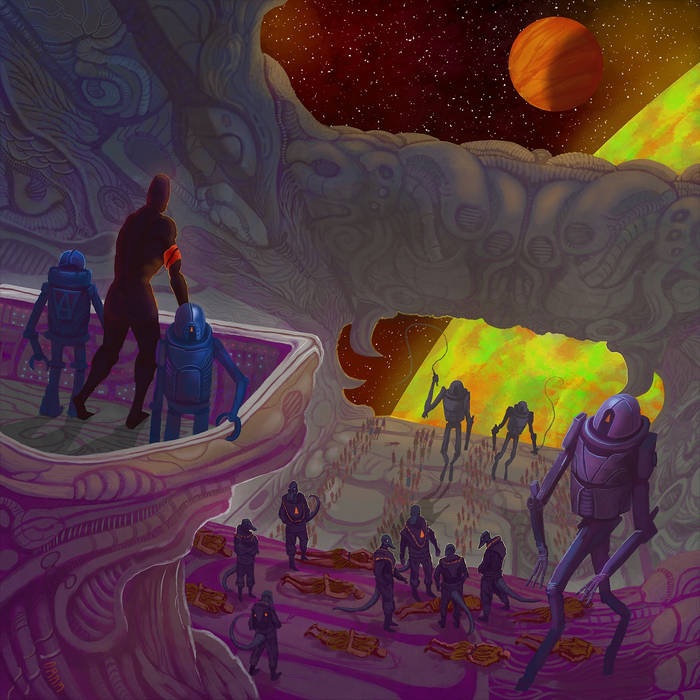 Mae Shults chugs along like a tattered spaceship on a collision course with a supernova. trepanation really knows how to pick ‘em. Favorite track: V. Vessel.

Emperor of the Underground of Doom..

Pairing the lyrics for the album alongside artwork inspired by conceptual drafts and the lyrics themselves, the full story of Planet Loss has been compiled into a vivid, visual experience which truly brings the story to life. Drawing influence from comic books such as 2000AD, Moebius, The City and more, this graphic novella oozes a classic retro-future style and is a reflection of the overarching visual sci-fi themes throughout the record and Wallowing as a whole.

The graphic novella captures the full story of Planet Loss chapter by chapter making it the ultimate accompaniment to the record by creating a fully immersive experience.

All art has been painstakingly created by original Planet Loss cover artist Luke Oram.
All words are written by Wallowing and are directly taken from the record.

Each variant of the CD comes with unique album art that forms a larger image when placed next to all variants of the CD.

Please note: This bundle is estimated to ship Late-February/Early-March and will be posted 1st class signed for.

The other two CD variants can be purchased separately from:

A UK based record label for extreme, experimental and progressive metal and dark sounds.

For band submissions please email your EPK to trepanation.recordings@gmail.com

Bandcamp Daily  your guide to the world of Bandcamp

Featuring appearances from Kari Faux, Bluestaeb and and interview with NY-bred artist Wiki